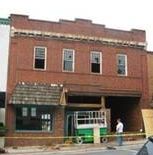 What a difference in the building at 33 N. Main in Belmont from August to March!

And here’s your chance to see the renovation that owner Richard LaVecchia has achieved as the new Designing Brides and the relocated Peppermint Shoestring hold an open house and grand opening Thursday, March 13, from 10 AM until 7 PM.

Nancy Lepore, owner of Designing Brides, and Lynnelle Dobbins, owner of the Peppermint Shoestring Children’s Boutique, extend a special invitation to Chamber members and friends to come by between 5 p.m and 7 p.m. for tours and refreshments.

The building, which was once used as a funeral home, a clothing store, and most recently, a gift basket shop, will be a fine addition to the thriving downtown community.

Dole and Myrick distancing themselves from Lame Duck President

Senator Elizabeth Dole and US Representative Sue Myrick both appear to be distancing themselves from President Bush and his hum-hum final year agenda for the nation.

Ms. Myrick decided to “…stay home and watch the president’s address on television…” on Monday evening, while Mrs. Dole had a previous engagement to speak in front of a constituent group in NC.

On Thursday morning, both skipped out on Vice President Dick Cheney’s address to a select crowd at the Charlotte Chamber of Commerce. Ms. Myrick begging off due the the impending birth of a grandchild, and VP Cheney acknowledging her “priorities”.  Kinda gives new meaning to, “I think I have to wash my hair”.

Still trying to curry favor with the administration, boy-politician, Patrick McHenry of the 10th district in NC, commented to the Observer, “the president missed the opportunity to push to make the middle-class tax cuts permanent. It was a good speech — but not bold enough”.

Mr. McHenry surely must realize that the tax cuts were not for the so-called middle class but the top 10% of incomes.

Creating permanence of these cuts, which are not set to expire until the fiscal year of 2010, would further drive a stake into the heart of the true middle class. The rich will not invest in new plants in Cherryville, Hickory, or Shelby. They will continue to buy their cars, remodel their kitchens, and go out to dinner — but not build factories, invest in their stateside employees, or contribute money to the United Way.

The Daniel Stowe Botanical Gardens (DSBG) are by far the coolest piece of the Gaston County sites to visit. Over time, the Gardens will be larger and more complete — there is a 40-year Master Plan for the site — world class by anyone’s standards. This was a privately funded project without government “partnership”. The late Daniel Stowe kick started and endowed the development of the Gardens with a donation of land and $14 million in the early 1990’s. All other development has been through private contributions and sponsorship.

The unique destination sites that now border the City of Belmont are the US National Whitewater Center to the east (just over the river north of the I-85 weigh station) and the Daniel Stowe Botanical Gardens. Along with historical sites located throughout the county, Gaston is blessed with tourism resources that can rival many pleaces.

Good luck to the folks of the community who develop and market these facilities. Belmont certainly has taken a lead when it comes to developing intriquing places to visit.

(Red Imperial Bromliad – one of 2,000 rare and exotic plant at DSBG)