The Little Train That Could

Belmont’s train got an locomotive yesterday, replacing the engine that was removed a couple of years ago. 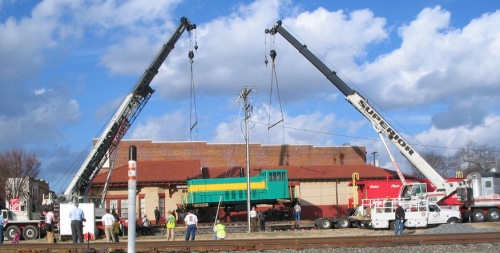 The placement of the engine drew a crowd to an already vibrant downtown, right at the same time as the middle school dismissal.

Dozens of 6th, 7th, and 8th graders already regularly mingle in the downtown area at the Belmont General Store and Caravan Coffee, waiting for their parents to pick them up.

This event, however, brought out city staffers, employees of the busy downtown merchants, and the chamber of commerce. Train enthusiasts, passersby, and curiousity seekers all stopped to watch the placement

Everyone was busily snapping pictures of the two large cranes that lifted the axles onto the track next to the already placed caboose and dining car. Shortly thereafter, the body of the locomotive was raised and set into place.

This should complete the little train, bringing back some interest in the train-related heritage that Garibaldi Station/Belmont holds within its history. The train station was a museum until just a few years ago. It sat empty until the upscale clothing store, Jolie, began operating.  The volunteers who ran the Train Museum had decided to close because they struggled getting volunteers to staff the facility on a regular basis.

According to the now local entreprenuer, Richard LaVecchia  — owner of several downtown properties, including Piccolo, OldStone Steakhouse, and the old Leader building (now being called, “the Rose Building” — ’cause it was owned and sold by Art Rose) — “…several projects…” are planned, “…where people can get into the locomotive and take pictures”.

Does the completion of the little train mean the return of a destination place in downtown Belmont?

3 thoughts on “The Little Train That Could”