Both the papers are now reporting that a 1,500 bed federal detention center most likely will not be built in Gaston County.

We kinda wonder why our county officials had to travel to Washington “for discussions” about this project? Wouldn’t have been a bit cheaper for Sue Myrick and former Mecklenburg Sheriff, Jim Pendergraff to have visited Gaston?

The Gazette, ever hopeful for downtown revitalization, expressed an interest for an “ala carte” project that would be less expensive.

Seems to us that the project tab of $150 million fits into “Big Plan” Palenick’s vision for Gaston — right along with the laundry list of a “conference center/hotel”, restaurants, a hidden homeless shelter, and an $18 million baseball field.

This is leaving us wondering what sort of earmarks that Ms. Myrick is planning to dangle for us as her re-election campaign gears up. Our schools who qualify for Title I funding are shrinking even when the number of poor students grows. The estimated $1.6 Billion (yes, billion) “Garden Parkway” is still an apple of David Hoyle’s eye, but without federal funding and passage of a Toll Authority from the state, that will be out of his lifetime. Maybe he and Ms. Myrick could talk – surely there is still a bit of money at the bottom of the pork barrel for good ‘ol Gaston.

The Observer is reporting today that the plans for the 1,100 acres below South Point HS have been shared with city planners.

Almost 3,000 new homes are planned, along with a 36-acre “regional” park, and an additonal 30-acres for an elementary school site.

It is great to see their plans, but some of the land reserved for the park and the school site are basically very difficult and expensive terrain to develop.

It is both a good news and bad news type of story. The good news is that they plan a long term build out of the project — 15 to 20 years; The bad news is that the road plan is also a bit questionable. It is relying heavily on the use of South Point Road and an unfunded “spine” road closer to the South Fork River, connecting with Armstrong Ford Road(Main Street) near Timberlake and connecting to the Garden Parkway.

We hope that this particular road is built BEFORE the proposed houses and towncenters are approved. If you think South Point Road is busy now, wait for this development to take off.

Unfortunately — well maybe fortunately — the state builds roads, Senator Pittenger has a very cozy relationship with the development firms around the state. We would not be too surprised if this “spine road” gets fastracked. As former city councilmember Irl Dixon once stated, the TIP ( transportation Improvement Program) had already designated that a road needed to be built and overlayed a road path. The Comprehensive Land Use Plan by the City of Belmont accepted this overlay, so all things considered, the road could be a go…

Hopefully, the funding will be forthcoming from the state legislature. We know that Representative Wil Neumann of Belmont is supportive, if not for re-election purposes at the very least.

Other good news on this project is the developer. Haden Stanziale is a recognized leader in large tract development. The project will certainly be first class. The bad news about this developer is that it contributes to the notion of economic cleansing concerns that many in-town and long-time residents have expressed.

When the property taxes on revaluation of property goes sky high two things happen. Pleople sell their property, or they can’t afford the tax bill. In this “bubble-burst” period of housing slowdown, both the resale of existing homes and new homes may help keep the tax values from rising too quickly.

We have a county commission that is very averse to raising pennies on property, but willing to hit the sales tax side for “good causes”  — this is a whole ‘nuther story completely so we won’t talk about it right now.

The Gaston County commissioners are planning to discuss a request by the County Schools to add a 1/4 cent sales tax to help build and maintain the school system.

This will be an interesting discussion because the residents just approved a $175 million bond referendum last November, and the schools have a multi-million dollar shortfall from the previous bond funds.

The “no-tax-but-will-fund-silly-projects” county board of commissioners will be televised tonight for your entertainment. Of course, it will be on the non-consent portion of the agenda after the consent agenda approves over $1.7 million of money including additional “donations” to DSS.

Parking fees not as big a windfall as Gaston commissioners thought

Are we surprised by this?

It’s ok to be optimistic — keep spinning away. We are all for user fees, parking at a distance lot helps the Gaston Healthcare Commission and contributes to a healthier community.

Maybe the rate is too low?

Feds have an interest in locating immigrant detention facility here

Well, ok, so it is official now. The Sheriff of Gaston County likes the idea.

The Equestrian Center property? Isn’t it under contract already?

Across the street from the proposed relocation of the Salvation Army Shelter and Old Boys Club?  palenick-project-downtown-gastonia.pdf

Yeah, that would rejuvenate Highland and the North side of Gastonia and certainly help out the Big League Dreams for Sims Park. It would really help the congestion at the 321/85 interchange.

Next to or near the Dole Plant? Bessemer City deserves job growth … hey, anything is better than nothing – there are a lot of vacant textile plants that could be torn down and the land reused.

Yeah, and it will be built with FEDERAL dollars, not local dollars !

And, it will benefit the community by CREATING more jobs – is that why the public safety services in the Gaston area have a hard time filling the current positions?

On JOB CREATION, it will demand more Sheriff’s deputies, more County Police, more Gastonia PD vehicles, and more Assistant DA’s. Is that what they mean by MORE JOB CREATION?

The above positions ARE locally funded – and given the Homeland Security disarray, no federal funds would be “found” to support the “support services” of such a facility.

So, a FEW local contractors will benefit during construction. Local government will have to be EXPANDED, and property owners who have investments (RE: Rental Units Available) will also benefit. Did we list all the special interests yet?

The Gaston Chamber must be licking their lips. The Feds would HAVE to watch Gaston County NOW – 1,500 beds is larger than the LA facility (which is closer to the border than Gastonia).

Families who have a federal detainee (yes, that is what they are called – no different than a detainee at Gitmo) would move to Gaston to be near their loved ones. We are sure the local hospital will be thrilled about the needed extra services — oh, yeah, that is county funding too. Not to mention the need for more desks in the schools.

Yes, there is a deep and lasting impact…

Tax Increment Financing has turned Gaston County cities and towns into the real life example of the movie version, “The Music Man”:

A con artist, “Professor” Harold Hill, comes to a small Iowa town in the early 1900s. He convinces the town that it needs a marching band, taking orders for the necessary instruments and uniforms. He also sells music lessons in advance, concealing the fact that he cannot read or play a note of music. In the process Professor Hill galvanizes the town out of its torpor and falls in love with the local librarian/music teacher. The movie is the original setting for “Seventy-Six Trombones” and “Till There Was You.”

An article in the Charlotte Oberserver reports that County manager, Jan Winters has bought into “Big Plan” Jim Palenick’s endorsement of the Big League Dreams program. Where did $23,000 to “study” the project come from? Another tap into the Tourism funds from the hotel/motel tax?

Another trip down the route of issuing municipal bonds without voter approval.

Isn’t “Big Plan” the same guy who questioned the Whitewater Park investment by Gaston area communities? Didn’t Mr. Winters have a dickens of a time dealing with the fallout of the failed Equestrian Center and county finances.

So, what are the differences?

Big League Dreams is a for-profit development firm that primarily builds baseball fields with the target area’s local money, and takes 50% of the profits (if there are any). The project is being sold throughout the United States as a way for cash-strapped communities to have “world class” athletic facilities.

The “target communities” are generally areas that have small parks and recreation budgets — if any at all –, are in areas of unrealized potential — along major highways/transportation corridors, and have attention starved local politicos. Several communities that bought into this project have already had to raise entrance fees — yes, parking/viewing — to meet the for-profit operating budget. Captured events, such as Legion Baseball, the Grizzlies, and any planned event, will have to charge an arm-and-a-leg to meet breakeven points. What guarantees are made by Big League Dreams if the community couldn’t attract major regional or national events?

This particular group is asking — demanding, actually (by the business model) — that the target community do the local site research, commit to the fund the construction, and guarantee the construction loan. Then they operate the facilities, and “split” the profits of the facility. The big kicker is that they MUST be able to sell alcohol in their parks. So in essence, the City (and County) in this scheme, want to get a piece of the alcohol sales and profit off of youth sports.

The passage of the Tax Increment Finance law in 2004, has allowed the traveling saleman to flood North Carolina communities with big visions and bigger ideas.  Jim “Big Plan” Palenick and Big League Dreams blew in with this passage.

The US National Whitewater Center is a one-of-a-kind, locally volunteer-driven, non-profit organization. It is a planned out, unique destination place that has not yet been duplicated. Significant private investment was pledged and committed PRIOR to public investment.

The community investment in the USNWC is guaranteed by the public investment of tax dollars, which will be tapped this fiscal year, and probably for the next two consecutive years. Is it a lot of money?

Was there, or is there, a payback from the Whitewater Center? This past summer, the first year of operation, over 50% of the staff were from Gaston County. Primarly college students and young adults. Several events attracted a world-wide audience and visitors, many of whom stayed in the Holiday Inn Express at exit #27. The center attracted over 400,000 visitors — yes, free, mostly curiousity visitors, many more than the 300,000 anticipated.

So far, the “Big Plan” Jim Palenick  public endorsement tally is over $30 million. We have to ask, what is next ?

Representative Myrick’s continued federal suck up for an earmark?

Ms. Myrick continues to measure her effectiveness as a legislator by her ability to incite fear and mistrust in the population. While doing so, also ingratiates herself with the “insider elite” of the Bush Administration. (Re: CAFTA tie break vote = Bush visit to Belmont — more than a mere coincidence).

Maybe this could be placed in the downtown section of Gastonia – it would really perk up the place don’t you think?

Other places with Federal Detention Centers:

Detention Center Blues, article from In These Times 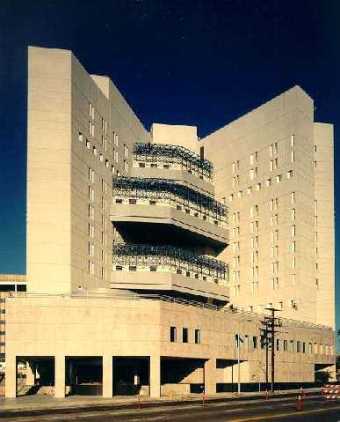