We Still Call It Suspicious 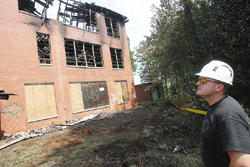 Regardless of the Fire Marshall’s comments about the nature of the Mayworth School fire on Sunday, it still is a fire that neighbors feel was deliberately set. “I wouldn’t say suspicious,” Hendrix said. “It’s just under investigation.” Good, we hope that it is thoroughly investigated.

We are not saying as much, but there have been incidents where a tight housing construction market and downturns in buying lead to “ways out” of project commitments or ways to get returns on investment.

This is an example of one of the “good projects” that we were discussing last week in an article about growth on the east side of the county. The proposed housing for seniors, is a good step. Of course, if you could afford it.

We believe that anytime an empty “big box” is going to be reused for housing or other economic development activity, that would be a good thing. In this case, Cramerton has a stated goal of becoming a bedroom community to Charlotte. In many ways it already has become just that with the growth and build out on top of Cramer Mountain.

This fire, while a set back in Cramerton’s plans, could earn the developer a few brownie points in this struggling community, if they come back with a solid commitment to proceed with the project.