Belmont and Mt. Holly are both attempting to deal with the massive planned home construction in their own ways. “Belmont City Council has approved construction of 2,269 homes in 17 developments, from condominiums to single-family homes on 68,000-square-foot lots. That would mean about 1,408 more school-age students in Belmont, according to calculations from Gaston County Schools.”

Of course, neither the city or the county schools have the ability to provide land for school construction. The city is averse to requiring developers to provide land in their plans because of a ” building time-frame requirement” for use as imposed by the school board. The county school sytem doesn’t want to specify a site or approximate site due to continued demographic changes. 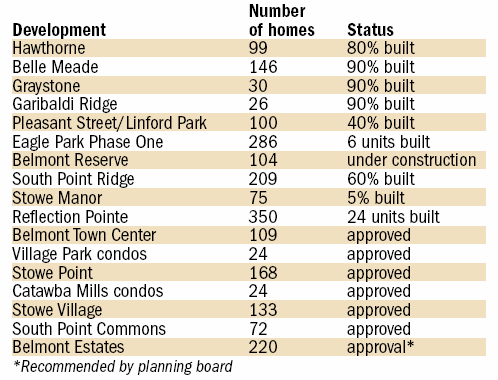 Last night, August 7, the city council approved the Belmont Estates schematic plans without rezoning or special conditions. However the new plans for this particular project call for a greater density (55′ x 125′ lots), 235 lots,  and no second connectivity point out of the project. That means all the traffic will be dumped out onto the two-lane South Point Road, right below the High School. Adrian Miller, staff member of the Belmont Planning Department, said that the project still needs to go through the technical review process and brought back to the P&Z board for approval, then back to council.

Councilmembers, Charlie Flowers and Becky Burch, who oppose planning processes in general under the guise of “property rights”, voted with the majority to allow another development to progress in the bottleneck area around the high school.

Belmont Reserve is another project that is under construction. This project, at the intersection of Eagle Road and South Main Street, is the re-development of the old Belmont Hosiery mill property. 14 units are about three-quarters complete, and signs posted on the windows of 11, say that they are “sold”. It appears that the markets for the Belmont Reserve are “empty nesters”, and young professionals. Just an opinion, but they are dinky, and when built out will be tightly packed together.

One of the “good” projects that fit with the surrounding community and the TND philosophy of managed growth is the Belmont Village project. Located on Myrtle Street, smack in the middle between South Main and South Central Avenue and across from the middle school, this project re-uses the old A&P grocery store site. Lots of steps up will be required, but the look is similar to many urban townhomes along the east coast cities.

We will provide some information and discussion of the South Point Road/High School area projects sometime in the next week. Overall, we are concerned about the proper development of in-fill projects being a fit under the neighborhood preservation and traditional neighborhood development (TND) policies.

See the next Belmont Front Porch entry about our feelings about the City Council vote on August 7 in regards to the Comprehensive Land Use Plan.

Source Articles: Belmont About to Boom, Mt. Holly Looks Ahead On Growth With Caution

On Blogging – A Cry For HELP !

Our editors, while savy business people, outstanding social hosts, and intelligent individuals, are just not “technical” enough to figure out on our own how to imbed the link functions while writing the posts.

Any fellow bloggers out there — feel free to comment with the specific directions about imbedding links. Our articles will be shorter and easier to view, and as you surf/click-through, you will be able to cover more territory.

You can also send an email to belmontfrontporch@yahoo.com

Thank you for your help !

Belmont Sizzle’s In The Summertime !

The following article is from the Gaston Gazette which also publishes a weekly tabloid called the, “Gateway Gaston”.

Vince Hill, one of our Belmont neighbors, owns the Caravan Coffee Shop in downtown Belmont across from Stowe Park. As part of the annual “Summer Celebration”, Vince piggybacked an amateur cookoff on Airline Avenue for the second year.

A dozen local grill masters put their butts to the test — along with their ribs, chicken and pulled pork — at an amateur barbecue cookoff in downtown Belmont Saturday, July 28.
The second annual Caravan Summer Sizzlin’ Cookoff withstood heavy rains Friday night and served up free samples of barbecue and sometimes beans, slaw and hushpuppies to more than 300 festival-goers Saturday afternoon.
Belmont’s own Scott Abernathy and his team, Bustin’ Butts, was the crowd’s favorite for the second year in a row. Out of a dozen cooks, Abernathy received more than one-third of the votes cast for the People’s Choice Award Saturday. But official judges did not put him in the top three of any category.
“He won the people’s choice last year, too,” said organizer Vince Hill, who owns the Caravan Coffee and Desert Bar. “Some of the contestants said they’d rather win the People’s Choice Award because at least you know people are enjoying your food. He had baked beans and coleslaw — a lot of good stuff.”
A team called A Butt and a Half from Alexis won first place for their chicken and placed in the top three of the ribs and pulled pork categories, as well. And neither of the cooks — 10-year-old Jeremy Burgin and his 14-year-old cousin Hannon Kennedy — are old enough to drive a car, Hill said.
“The little guy, his father cooked professionally,” Hill said. “He did all his own rubs and sauces.”
Hill said some the local barbecue might be good enough for professional competition, but the Belmont event is a “backyard competition for local people.”
“My hats off to all the contestants,” he said. “Last night we had a monsoon come through and blow everybody’s stuff all over the place. When it was over, they got their stuff together and kept cookin’.”

And the Winner’s are:

We can tell you alright, the times we can get Airline Avenue blocked off for events like this and the “Beer Garden” for the “Friday Nights Alive!”, we make downtown Belmont R-O-C-K !